Running heavy equipment in extreme winter weather presents a unique set of challenges and maintaining airflow to the engine is one of them. Failure to keep snow, ice, or rain out of the air intake may result in the engine’s air filter media becoming saturated, increasing inlet restriction, thus starving the engine of air and causing the machine to de-power and stall. 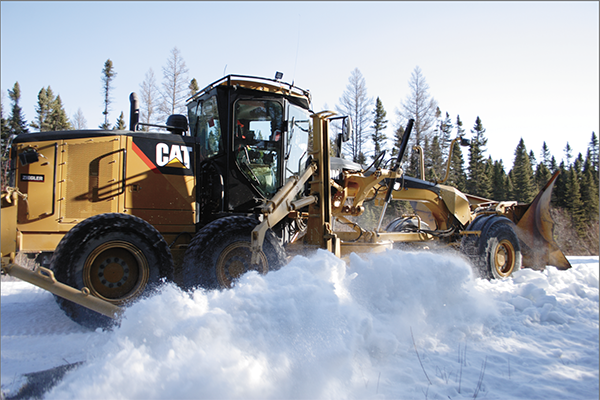 Most engine precleaners perform poorly with heavy, wet debris, especially in cold environments. Precleaners with inefficient airflow patterns are prone to ice-crystal condensation forming inside, blocking the rotor’s ability to spin and eject debris as designed. Other precleaners clog quickly in winter weather, as they have prescreens that are too fine and become blocked or ejection slots that are too narrow for clumps of snow and ice to pass through. Bearings, which allow a precleaner’s rotors to spin, are often unsealed and/or unprotected from the weather, leading to corrosion and early failure.

Sy-Klone, however, has two precleaning options to protect your engine airflow in the most extreme winter weather, even at high altitudes.

Our heavy-duty non-powered precleaner, the Series 9000, is rated to -40°F (-40°C) and is able to handle both wet and dry debris. The rugged construction of black, engineered polymer withstands extreme low temperatures, and the carefully engineered airflow design allows the Series 9000 to avoid many of the freezing and condensate issues encountered by other precleaners.

Air is drawn in from the underside of the dome, eliminating much of the snow or ice from entering at all. The material that does enter the dome is whirled by the rotors into stratified bands along the inside walls, which prevents the formation of clumps inside the precleaner. The bands of snow are whipped around to exit along the full length of the large ejection slot, preventing clogs. The clean air is directed in a 180° U-turn to go down the air inlet, which leaves behind any snow and ice remaining in the airflow.

Some rotors inside a precleaner can lose energy when impacted by heavier debris such as snow and ice. The Series 9000 rotors have a proprietary throat tab design, which recaptures rotational energy from the clean airflow going down the inlet pipe. This feature allows the Series 9000 to maintain its efficiency far better than other ejective precleaners, no matter the weather.

This video was taken during -22°F snowy weather. Note that during the winter snow season, we recommend dropping the prescreen down the pipe to allow the snow to process through the precleaner without risk of build-up on the prescreen (reattaching the prescreen in the Spring).

The heart of a non-powered engine precleaner is the bearings. The Series 9000 design features high-quality sealed bearings inside a bearing cavity with labyrinth seals, packed in a grease concentration that can withstand low temperatures. The sealed bearings are encased deep inside the precleaner with no exposure to the outside elements, so they work through the winter, and beyond.

Learn more about the proprietary features which set Series 9000 apart from other precleaners.

The efficiency of a non-powered precleaner is controlled by the rate of airflow being pulled through the unit by the engine. The faster the airflow whips the rotor around, the better the precleaning. However, heavy-equipment machines are often sitting with idling engines and low airflow demand, which reduces the ability of non-powered precleaners to provide protection. 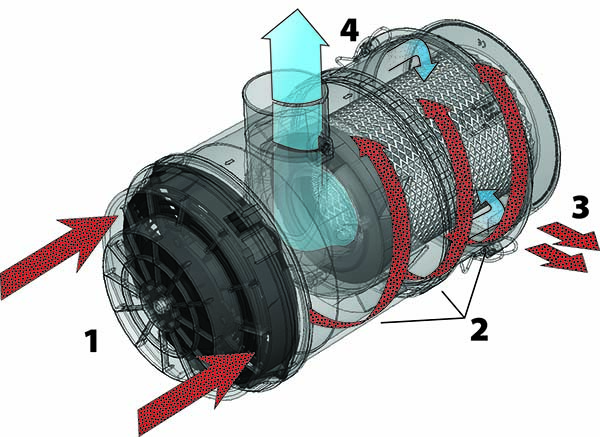 The XLR Powered Precleaner design has solved that problem. The minute the key is turned on, the XLR is performing at 99.99% precleaning efficiency with very low restriction, regardless of engine airflow demand. The airflow is pulled into the unit by a motorized fan warranted to -40°F (-40°C), which breaks the snow and ice into tiny bits. The precleaning action removes the majority of the frozen particles, consisting of the heavier-than-air portion of the debris, which ride along the inside walls until they are forcibly ejected at the rear of the unit, almost like a snowblower. Then, the remaining light-as-air particles are drawn to a high-efficiency filter located in the center of the unit, well out of the path of the heavier debris. 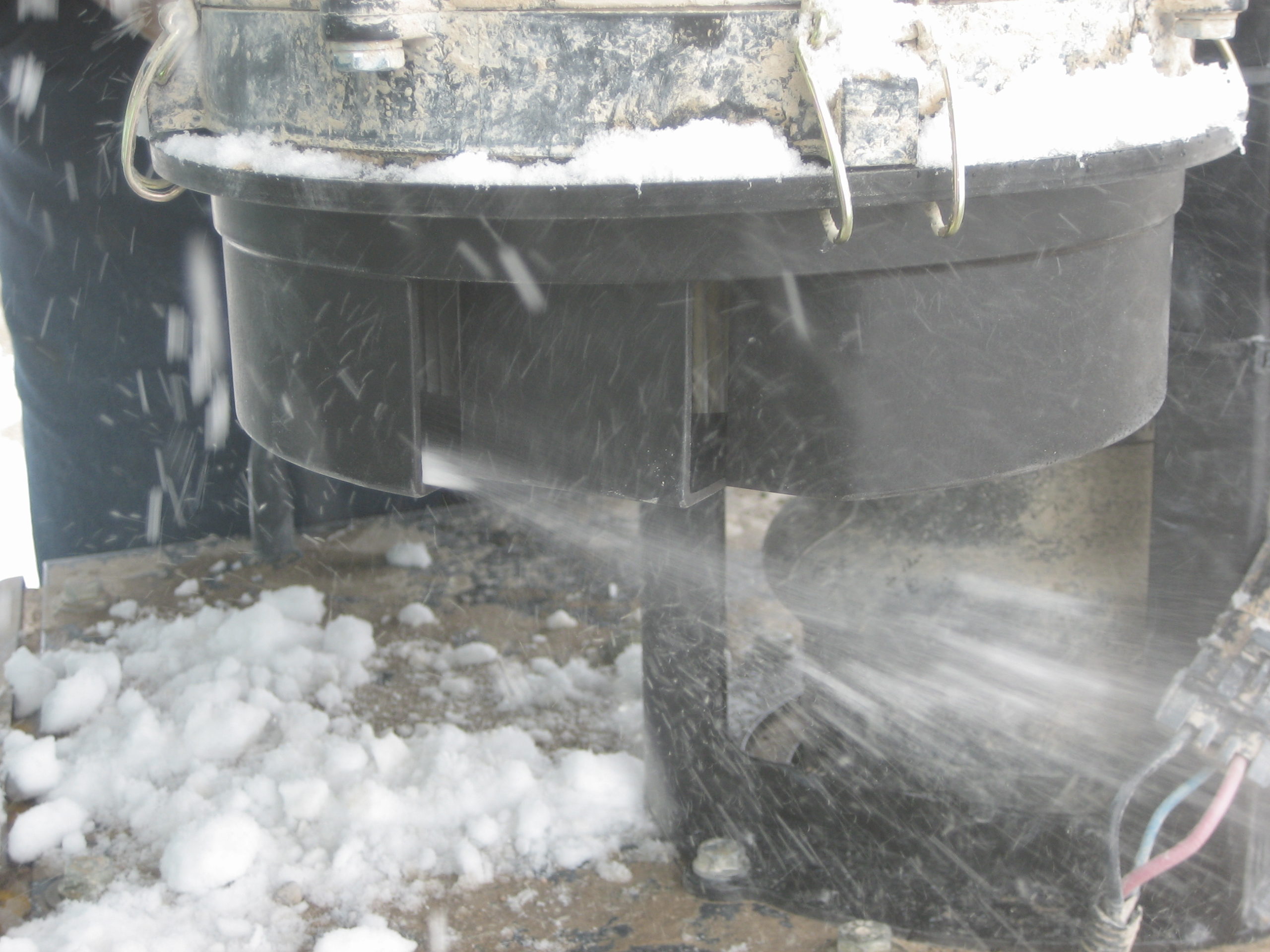 Because the XLR is at the same ambient temperature as the snow and ice, the frozen particles fall off the filter, which is made of high-tech media that is designed to shed debris.

Sy-Klone offers engine precleaners for heavy equipment with proven performance in the snow and extreme cold temperatures. Contact Sy-Klone for more info, or locate a dealer near you in our Where to Buy section. 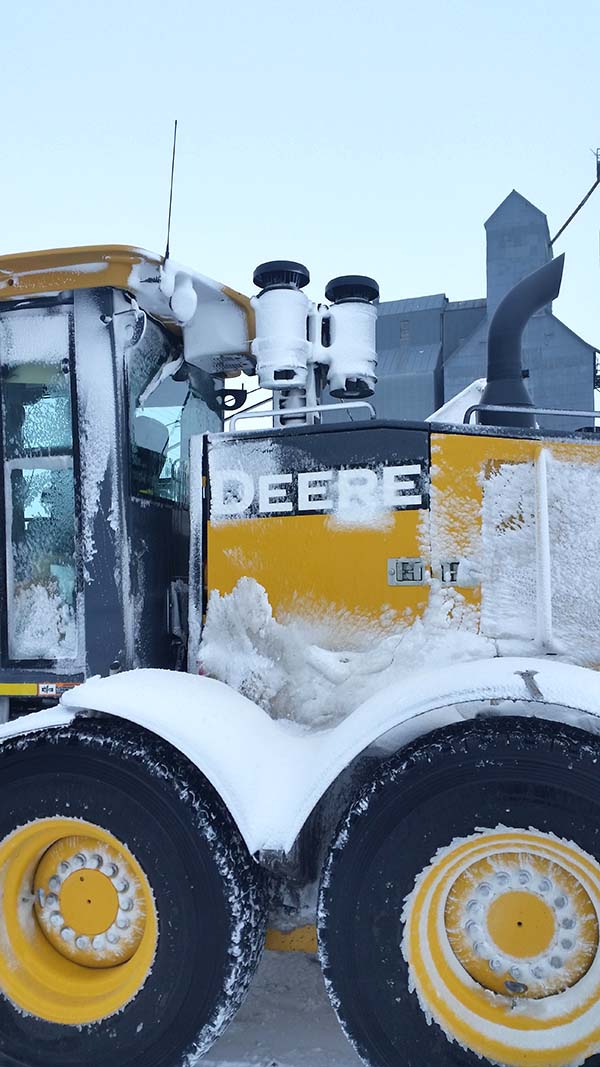 When the XLR is vertically mounted, put the rain cap end up, ejection ports down.